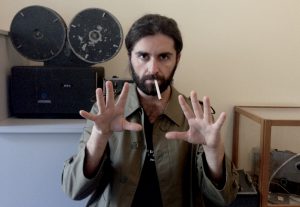 ADO HASANOVIC (Srebrenica, 1986) is a film director based in Rome. He made his first short film called “Predrasude” (“Prejudice”) in 2007 for the youth exchange program “Let’s act together is better” in Struga (Macedonia) in collaboration with Association “Prijatelji Srebrenice” and youth organizations from France, Italy and Macedonia.

Ado participated at the Sarajevo Film Festival Talent Campus in 2008 and worked as Creative Director of the Srebrenica Short Film Festival “Srebrena Traka” from 2007 to 2011.

He later directed a film about young people living in Srebrenica, “Ja Sam Iz Srebrenice”, which was premiered at the Mostar Short Film Festival in 2008 and awarded Best Student Film.

From 2010-2013 Ado studied Directing at the Sarajevo Film Academy, from which he graduated with the short film “Mama”. In 2010 he also finished the Nansen Academy, a Norwegian course whose focus of study was inter-ethnic dialogue.

In 2012 and 2013 he worked as an intern at the Cinema for Peace Foundation in the Department for Post-Production, working on a movie about the Genocide that took place in Srebrenica. In 2012 Ado also completed the documentary summer school organized by James Madison University (USA) in Bosnia and Herzegovina and received the award as Best Student from the Foundation Studium.

In January 2014 he enrolled in the prestigious National Film School “Centro Sperimentale di Cinematografia” in Rome, where he specialized as a film director. Since 2015 he has been the Art Director of the Mediterranean Short Film Festival “The Author’s Passages” in Sant’Antioco, Italy.

In 2017 he finished a Master in Dramaturgy as a guest student at the Academy of Performing Arts in Sarajevo.

He won many international awards for his short films “The Angel of Srebrenica,” “Blue Viking in Sarajevo,” “Mama”, “Breath of life Srebrenica,” “Pink Elephant” and “Nomophobia”.

His first feature film, “Ja Sam Ana”, is currently in development with the Italian production “Il Gigante” and “39Films”, in co-production with the Serbian “This and That Production” and the Hungarian “Foxusfox.” The project won the Focus-Fox Studio Award at 15th Sofia Meetings.

In 2018 Ado founded the Cultural Association “Admon Film,” whose goal is to educate and to promote film culture.

On August 20th 2019 he was awarded with the Sarajevan Golden Medallion by the Mayor of Sarajevo Abdulah Skaka as a special recognition for his cultural achievements.