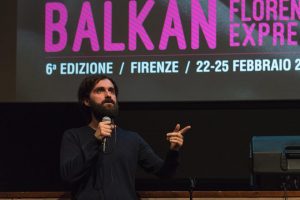 After the screening of Pink Elephant, Ado Hasanovic attended a Q&A session