Ado Hasanović’s NOMOPHOBIA won the BHFF 2019 Golden Apple Jury Award for Best Short Film. NOMOPHOBIA offers an unflinching look at the conflict between a mother and daughter, and explores the broader issue of generational gaps between parents and their children. With a dramatic ending, the film leaves us with probing questions about the challenges of coming of age in the era of modern technology and social networks.

BHFF 2019 Jury statement: NOMOPHOBIA by Ado Hasanovic delivers the convincing and passionate story about the alienating effects produced by the contemporary society’s illness defined as the fear of being left without the cellphone. Special quality of this film is it’s visual precision and capability of capturing the key moments of this addiction, through the visual cinematic twist.

This year’s theme of the festival was: “Not only drugs, young people and addictions”

Addictions are the subject of a survey that has been archieved in middle and high schools of all Italy, on the occasion of the 4th edition of the campaigning “Discovering the human body”, initiative that has been promoted by Scientific Societies under the auspices of the Ministry of Public Education.

Answers from 13360 teenagers have shown their awareness about the new forms of dependence, technology and doping at first. Teenagers recognize in technologies the main cause of abuse behaviours, not related to substances; in fact, 88 teenagers on 100 think this way.

Here is the league table: videogames (49%), computers (44%), television and mobile phones (37%). In 54% of cases new technologies are considered the most widespread among young people.

The short film speaks about the illness of our century: “Nomofobia” is in fact a neologis born out of the crasis between the words “no-mobile phobia”, which literally defines the fear of not having the telephone by your side. It might sound like a very remote disorder, but what people may ignore is that 53% of the British population are already affected by this disease and Italy itself is the third country in the world for number of smartphones.

The story was inspired by a real fact that took place in 2015 in our country when a 17-year-old girl murdered her mother because she had taken her telephone away and prohibited to use the computer.

Nomofobia is a short film that is shot in a single 14-minute long take. This was a Bosnian-Italian co-production. It is produced by Admon Film (Bosnia and Herzegovina) in co-production with Nema Problema Onlus (Italy). 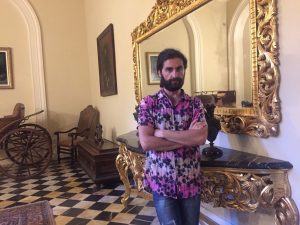 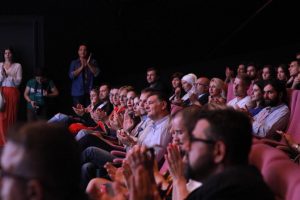 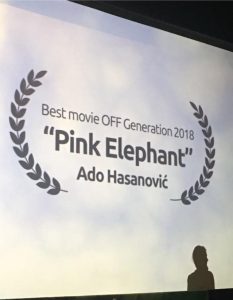 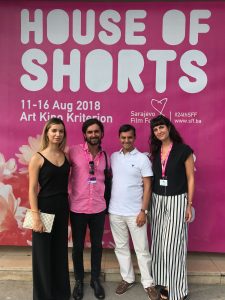 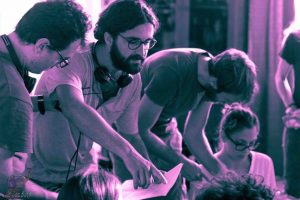 Ado Hasanović is the director and producer of Nomophobia, his latest short film written by Elisa Bondavalli.

Shot in one long-take, the film wants to explore the disease we all suffer from: “Nomophobia”, which stands for “No-mobile phobia”, the fear of being left without cellphone.

Shooting the film in one long-take was not that easy, as Ado reveals: it took three months of preparations and rehearsals before feeling ready to do it.

«Nomophobia is my first short film shot in a long take. It was quite difficult to make it, but at the same time it was a very exciting experience. Rehearsals and maniacal attention to details are essential in order to make a good long take; it took me a while before I chose the right actors, the proper location and all the other fundamental aspects of the short film, like costumes, photography, sound and camera movements. I wanted to give birth to a unique scene, capable of being shot and experienced in one single breath. Nevertheless, Nomophobia is not only this: it is the name of an illness as well, a very peculiar one, that allows us to reflect on the emptiness of values of our society» said Ado Hasanović. 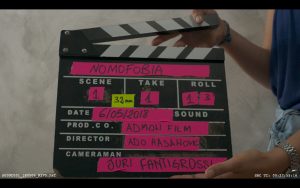 The story might seem a bit absurd at a first look, but the viewers will be shocked when knowing that it is based on a true story that took place in Italy a few years ago.

The director had a very clear idea of the feelings he wanted to conceive to his viewers and the style he had to adopt.

After a terrible parents-teachers meeting, Maria tries to put her daughter Jessica back on track. But there is a third wheel interfering in their chat: Jessica’s phone, by which the girl is totally absorbed. The mother soon decides to grab the phone, not considering the consequences that her decision might provoke.

The film is shot in a one long-take. To give a more realistic and spontaneous touch to the story I used a hand camera to follow closely my two characters in their space. In particular, there is a moment that distinguishes itself from all the others for its ambition and complexity: for these reasons I decided to turn to small, light and easily handleable equipment.

Close-ups and medium close-ups are the mainly used frames, in order to capture mother and daughter conflicting emotions. Cinematography embraces cold tones to underline the empty and dry relationship between the women and the daughter’s impersonal and virtual life.

It is my intention to show these human characters for what they actually are, in both their dramatic and absurd faces: my glance will not be the one of a judge, rather a very empathic one.

“Pink Elephant”, the short film by Ado Hasanovic, is selected for one of the oldest film festivals in Europe, the Pula Film Festival.
The short film was the graduation work of the director, who specialized at the national Italian film academy Centro Sperimentale di Cinematografia in Rome.

For the casting they were supported by the Academy of Performing Arts in Sarajevo, in particular by the Bosnian film director Srđan Vuletić. In the short film there are actually three Bosnian actors performing, Jasna Žalica, Izudin Bajrović and Amila Terzimehić, and the Italian actor Fabrizio Colica.

Pink Elephant was selected seven times in the Official Selection programs of different international festivals and it was nominated for the 15thBosnian-Herzegovinian Film Festival in New York City (USA) for the Jury Award for Best Short and for the BHFF Audience Award for Best Picture, together with other two nominations for Best Acting Performance to Izudin Bajrovic and Jasna Zalica.

«Working on the script and developing the characters was a fundamental work for me, even because I had to choose three Bosnian actors and an Italian one», said Ado Hasanovic.
«This short film was entirely shot in a film studio in Rome. It was a big challenge for me and for my Italian set designer because we needed to recreate a Sarajevo-looking atmosphere in Rome. The most curious thing about shooting Pink Elephant was that I was giving indications in three languages: in Italian to the crew, in Bosnian to the actors and in English for scenes involving both the Italian and the Bosnian actors».

The film is about a Bosnian bourgeois family welcoming back the studying-abroad daughter and his new Italian boyfriend. After the initial enthusiasm, things start to change when the father notices a tattoo on her daughter’s back.